The most popular lacrosse stick series in recent history, the kryptolyte lacrosse shaft is lightweight, durable, inexpensive, and has maintained a good look, too. At 5.8 ounces, this shaft is just barely heavier than the warrior krypto pro, and is also slightly less durable. And, if you are going for a flashy looking lacrosse shaft, then go kryptolyte. Every year warrior comes up with a wicked new design for this shaft, and now they have started releasing limited edition versions such as the krypto karbon and the krypto element to further the spread of the kryptolyte disease.

The kryptolyte is a great shaft for any age group, because it is strong enough to withstand hits in high school level lacrosse and light enough for younger kids to carry without weighing them down. That, combined with its usability and price make it a wicked all around shaft, and aid in its astounding popularity. It is sold at around 75$ in many lacrosse stores, whether they be online or local, and that is a very inexpensive price tag when compared to other shaft of equal value which normally cost around 100$. Warrior lacrosse really succeeded with this shaft.

If you are a defender, then the kryptolyte d pole is a good buy, although the shafts key mark that makes it good is weight, and although many may disagree, honestly weight does not matter that much for a defender. As a defender, you should already be strong enough to use any shaft out there, so weight really just does one thing: More Weight=Harder, Slower Hits vs. Less Weight=Quick, Weaker Hits. I think finding a balance is key, so the kryptolyte isn’t the best choice for a d pole out there. But, that doesn’t mean it doesn’t perform at all as a d pole. In fact, for younger kids this can be a great shaft for a beginner defender to use, just because they can’t handle a heavier pole. Also, for an LSM, a light d pole can help them with keeping up with the middies. A better choice, though, would be the krypto pro as a d pole, because it is stronger, yet also lighter, than the kryptolyte.

I have found that many people like to upgrade to this lacrosse shaft from the beginner aluminum shafts after they know they are going to stick with lacrosse, so a lot of intermediate level players can be found with a kryptolyte. Generally, lacrosse players will upgrade further, to a shaft like the krypto pro, or the STX sc-ti pro, although Advanced players still cam be found using this shaft, rather often actually, but most usually upgrade to a 100$+ shaft by that time, even though the kryptolyte can compete against much more expensive shafts. This warrior lacrosse shaft weighs almost nothing yet it still doesn’t have the krypto pro one hand weilding problem, so in that way it can compete and may even succeed over the krypto pro.

All together, if you have been using a cheap shaft for a year or so and are looking to upgrade, go kryptolyte and further your success! 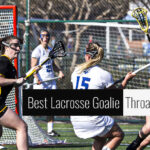