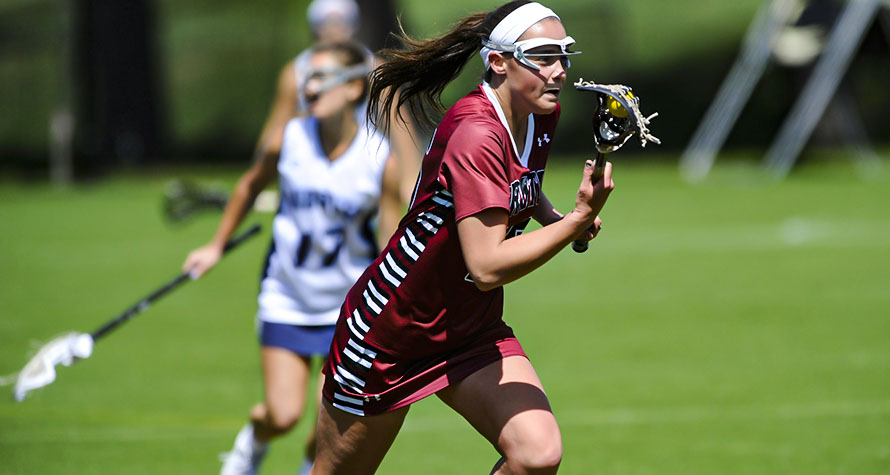 Transition with Progression for HS and Rec

We have often talked about the high percentage of practice time spent by top NCAA coaches in uneven (transition) scenarios. Hopefully, we understand this key concept and get the ball moving quickly, inherently teaching players to look up and recognize the open man and use defensive sliding in a scramble-like situations. These drills emulate the way most goals are scored in games, in mini snapshots of transition. Plus, they are a fun way to practice.

Many top NCAA coaches use a great fast-paced drill run uneven offensive scenarios in progression, which simply means they build from 2v1 to 3v2 to 4v3 and so on with each repetition in the drill. This keeps each run in a drill a little different, increases the duration as well as the tempo, and offers a hidden way to condition players. However, most college coaches carry a 40-man roster and can run this drill in a full-field look. For high school and rec coaches, it is not so easy. By the time we build to 5v4 or even 6v5 and go twice down the field, we are out of players and/or the players are exhausted, as we carry much smaller rosters, often 20 to 30 players.

This is often the case when HS and rec coaches attend clinics and listen to the college coaches, who so willingly and honestly share their practice concepts. Many of their drills are designed for large rosters and full-field applications. This drill is a great adaptation of the basic drill that numerous NCAA lacrosse programs utilize in practice, but it is modified for a smaller roster size. We call it 2v1 build-up.

We start with a line of defensive players positioned off to the side in the alley. This line will include all of your poles and maybe half of your middies. All other short-stick players are at the midfield line. In the first rep to begin the drill, the coach blows the whistle, two shorties come sprinting down the field as one defender enters the play, and we have a 2v1 situation. This entire first rep (and each rep) of the drill lasts only 4-6 seconds. On the whistle, the ball is rolled aside if there was not a shot or take-away. And the three players in the first rep of the drill stay on the field.

Off a shot or errant pass, or if players just slow down, use a quick whistle, and the next shortie in line breaks from the midfield carrying the ball charging down the field as an additional defender simultaneously enters the drill, and we have 3v2. We play a fast 4-6 seconds, the whistle blows, and we continue to add one at a time up through 5v4 or even 6v5.

Remember, these mini snapshots of transition last only 4-6 seconds in games, so we need to keep it realistic and extremely fast-paced. And remember to switch the middies from offense to defense during the course of the drill, or add your LSMs to the midfield line to practice carrying in transition. We usually let the attack players just stay in the offensive lines at the midfield.

To keep the drill fresh and different for players, here a few of my favorite variations: