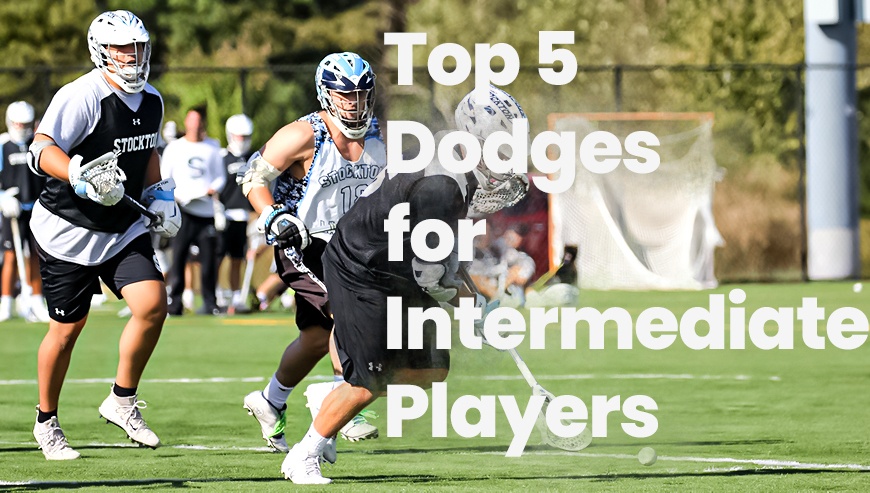 As the players progress their game in Lacrosse, it becomes imperative for them to learn the different techniques and hone the attack skills. The basic purpose of learning new techniques, and in particular ‘dodging’ is to always to stun the defender and score a goal. Intermediate Lacrosse players often learn the following five dodges to up their game.

One of the utmost popular dodges, The Rocker is essentially a fake Roll Dodge. For most players who are comfortable in executing a Roll Dodge, the Rocker Dodge comes as a natural extension of the technique. Often done immediately after the insider roll, the Rocker enables the attack player to catch the defender off guard and score a goal. Executed similar to a 1-2 punch, the first punch is a normal roll dodge and the second being the knock-out punch. The offensive player moves to one side of the cage and position him or her to conduct a roll. However, instead of conducting the roll the player dodges and plants back upfield only to turn the corner and finish.

Often the Roll Dodge and the Rocker Dodge are the most used techniques seen in the game of intermediate players. Famous players such as Matt Rambo and Dylan Molloy are often seen using this dodge.

One of the most underutilized techniques in Lacrosse, the Question Mark Face is a sure shot to success. Conducted similar to the question mark dodge, the player starts by moving towards the cage, steps out, and throws a fake pump as if it to shoot but pause. The defense, out of intuitive reaction will run towards inline. However, the ball is with the player and the shot can be taken subsequently. When conducted properly the question mark fake is a very effective technique. Watching Rob Pannell do a question mark fake is an absolute delight.

The Finalizer is about taking advantage of the triangular part behind the goal. Executed correctly, the move can trip defenders and allow the offensive player to score the goal. The players start by doing a split dodge at X. It begins with the player progressing towards one side of the cage and rolling back to move to the other side. However, just after crossing the triangular piece, the players come back to the original side. If the timing is correct, it is very likely that the defender shall trip and as a result, the offensive player will have easy access to score a goal.

The beauty of the finalizer is that it can be used by almost anyone as it solely relies on the player’s foot movements. John Hopkins and Joey Epstein are great at deploying the finalizer move.

The purpose of learning the dodging techniques is primarily to keep the defender always wondering about your next move.

The fourth in the list and techniques, which rely solely on the player’s physical strength and ability are the Bull Dodge and Speed Dodge, respectively. The players, who can sprint fast often deploy this tactic and simply run past the defense to score a goal.  Using one’s ability to sprint at lightning speed to score a goal is called Speed Dodge.  An alternative to the speed dodge, Bull Dodge deploys the use of players built to intimidate the defensive player. Less of a technique and more of getting physical with the defender by using one’s physical attributes, the bull dodge is essentially all about using one’s body to score a goal.

Jordan Wolf, by virtue of his speed, is the best example of a player deploying speed dodge. Matt Rambo and Sergio Perkovic are famous bull dodgers too.