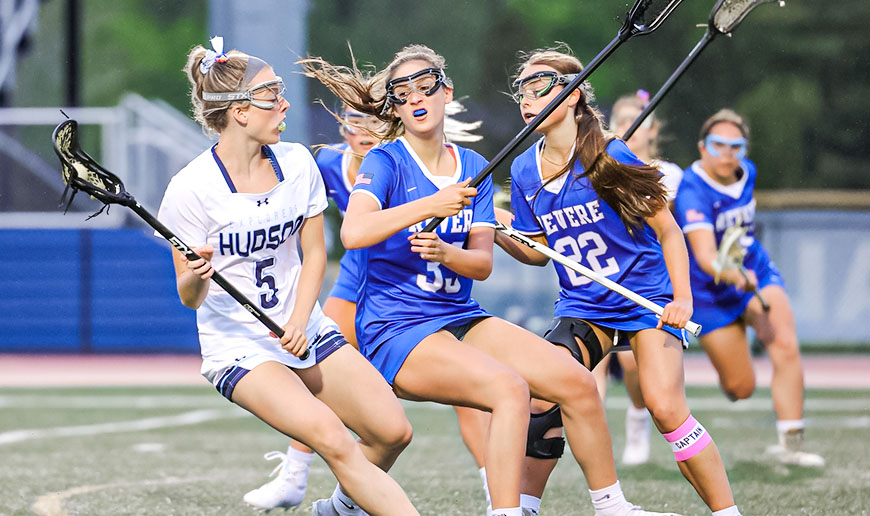 For a majority of new and young lacrosse players, scoring a goal happens to be the most exciting thing. However, to enhance goal aiming skills, the players need to practice certain drills carefully, with consistency.

This drill enables the players to set focus on specific part of the net and shoot balls in that region. You will need a bucket of balls, a goalie and player.

The goalie has to be at his position. The offensive player will be 15 yards away and the coach will stand behind the net. The coach, invisible to the goalie, will signal the player to make shot at varying sections of the net- including lower left, upper left and right etc. To make the drill more fun, you may give points to each player for each goal scored. The shooter has to act a little tricky by not looking at the direction before shooting.

In lacrosse, the players rely a lot on the teammates to get supply of the ball. Players expert in catching balls pass the ball to the teammates on the move so that shots cutting the defense of the rival team can be taken. This drill is ideal for this purpose. You will need a bucket of balls, one goalie and three players.

The goalie must be at his place at the start. Two players are positioned behind the net, at left and right sides of the goalie. Each of them is given a number of balls. The third offensive player, 10 yards away ahead of the goalie takes a shot. As the coach indicates, the right side player makes a pass to the player at front side. The player catches the ball and takes a shot without delay. As soon as the ball is released, the left side player makes a pass. The drill goes on like this from left to right side and again left.

Shots on the Go

The most skilled lacrosse shooters are those players who can take accurate shots while they are moving across. This drill is meant for sharpening that skill. You will require a bucket of balls, one goalie and 4 players.

The goalie takes his position at the beginning. Two players should be positioned at left side of the goalie and 2 others will be kept at the right side. The distance between the goalie and both set of shooters will be 10 yards. There should be enough distance between the players positioned at the left and right side as well. Both sets of players should be given enough balls with them before the drill starts.

One of The left side players will sprint across and move to the goalie and take a shot while he is still moving. Then he will move to the right side of the field. As the 1st player makes the shot, another player from the right side repeats the same process and he shifts to the left side. The drill continues with players taking shots on the move and then changing sides.

The ability to outshine a defender and make a pass is something across offensive players dream of. This drill is ideal for developing such skills. You will need a ball and two players with a goalie.

The goalie must be at his or her position. One player has to be kept 20 yards away from the goalie and he should be given a ball. A defender starts just 5 yards away from that player. As the coach hints, the offensive player moves and tries to dodge past the defender and take a shot.