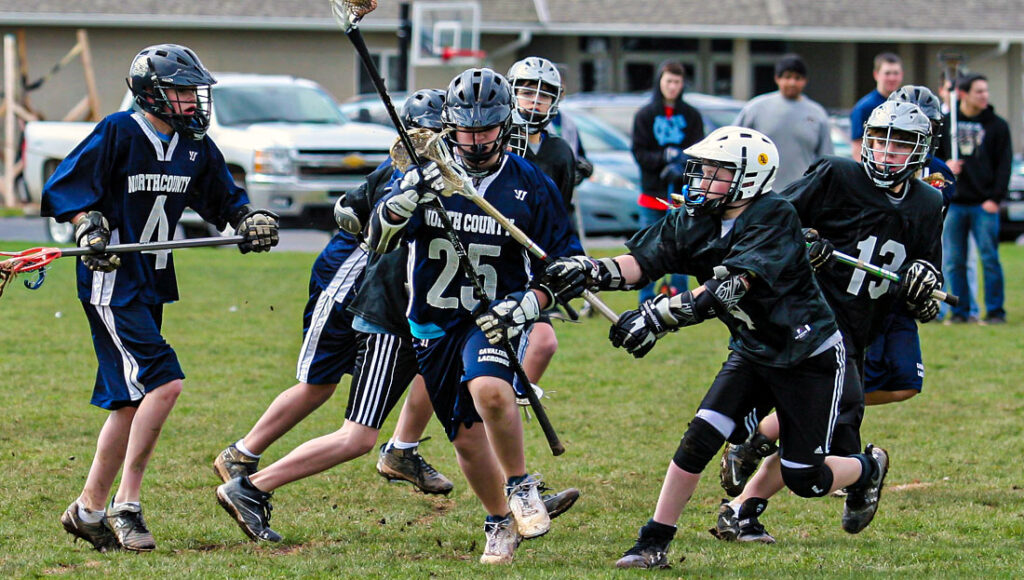 Top 10 Developments in Lacrosse History That Has Changed The Game

Lacrosse has evolved a lot from the past. You may think that the brand name or team logo is the greatest thing in lax since sliced bread but I think you’ll see the difference when we’re through. So without delay, here are the top ten developments which make our game the great game it is today.

We’d all love to play lacrosse forever. But with some breaks in between. Early games would go on for hours, days and longer. Never ending games can get in the way of things we have planned, like dinner and graduation. If our games last over two hours today, they are “condensed” for TV. The addition of the clock was pretty huge.

Just for the purposes of viewing, coaching and refereeing the game, the addition of boundaries were a pivotal moment. The Women’s game left the sideline essentially open until only recently. The whistle would be blown when the players chasing the ball came upon their first possible obstruction like a fan, the track surrounding a field or even the Frisbee catching dog or sunbather on any adjacent grassy space.

In the early game a player who could “throw the ball further than the eye could see” was a star player. The field configuration changed the skill set of lacrosse, among many other things.

This is a chicken and egg scenario. What came first the goal keeper or the goalie pads and stick? We imagine if the equipment wasn’t developed first, then it would have been developed only very shortly after the advent of the padless goalie. We’ll lump these together as one great change in the game. Can you imagine the game today without the exciting and courageous play of properly protected goalkeepers?

When you see pictures of the lacrosse stars from about 1900 until 1982 you can’t help but cringe at the tightly fitting and very short shorts. It was at Calvert Hall in Baltimore that everything changed. A player’s mom, mimicking the length of the popular Birdwell Britches surfboard shorts, but going a bit baggier, for full runs, sewed the longer shorts for all the members of the team. The next year half of the old MSA was wearing a longer short.

The Calvert Hall stars went off to North Carolina where UNC was the first college team to wear long shorts. Legend has it that Michael Jordan wore UNC lacrosse shorts to practice and the hoops team soon changed to the longer shorts too. In lacrosse, this represented the biggest advance in the apparel of the game since, well, we added apparel to the game.

Lacrosse was played in the nude or close to it for hundreds of years before the first short shorts, which seemed like quite the advance at the time. And from that point in time until the advent of Under Armor, near the turn of the next century, we were spared from knowing way too much about our teammates and opponents.

This entry really encompasses a series of changes to the ball made over the years. At some point a carved round dense wooden lacrosse ball replaced a river-smoothed semi-rounded rock. This was paramount, as the last item on our list, the helmet, had not been developed yet.

At some point leather balls were used with various heavy fillers including rubber, which eventually emerged from under its shell to be the ball of today. For many years, rubber lacrosse balls were assumed by many to be aptly imprinted “Indian Rubber” and now I guess they are just rubber because they are made in China instead of India. The consistency of weight and size made these balls a major advance in the game.

The only inventions in the modern era that make this all-time list are plastic head and the alloy shaft. Both made the game quicker and faster and coincide with the game’s greatest growth since the 1890’s.

In our era we probably consider these to be more important than they really are but here’s why we think so. At the time of the first plastic heads, the poles were wood or very heavy aluminum so they weren’t much lighter yet but the whole set up was now more consistent and most importantly, symmetrical. In fact, two plastic sticks were developed at the same time, one a symmetrical design and one that was detached and made of plastic but looked and felt just like the single sidewall wooden stick.

One never made it to major manufacture and the other is the granddaddy of the stick you use today. And while the detached symmetrical head signaled the end of the wooden stick craft in the mainstream of lacrosse, the era of pocket customization began, shooting strings were lowered and the game evolved from a mostly single handed (righty or lefty) forward overhand passing affair to the gun slinging acrobatic thrill fest it is today. A championship game in the 50’s would not have featured a single underhand shot and the behind the back passes of the 60’s were awkward at best.

The plastic and the pockets changed that in short order as the stars of the game were firing behind the back shots and wormburners by the mid 70’s. The shaft also evolved from the heavy oval white aluminum to the gravity defying materials we use today, but most importantly it was separated from the head and that gave us the ability to swap the shaft when it busted and keep the head we loved.

In the 60’s when a player broke his shaft he would get depressed as the whole stick was history. But the first broken shafts of 1970 and 71 were quickly replaced and their heads lived on. Add this to the consistency of the new manufactured products and the overall reliability of the lacrosse stick was increased many fold.

Lacrosse players in the 1930’s got the idea to wear cups protecting the groin area from hockey players who also dealt with shots traveling at high speeds. This was certainly good news for a sport that is traditionally passed from one generation to the next.

3 – The Helmet and facemask.

I’m not sure whether man has become a lot smarter over the last 100 years or more cowardly but every sport that has a helmet now did not then. The shot speed and physical blows of lacrosse demanded this improvement in order to move into the modern era of litigiousness.

Head safety is important. We use our heads for important things, like remembering where we parked after the game. Another version of lacrosse, played by the Oklahoma Choctaw opted to stay lid free and added, instead, lead weights to their sticks called “skull-crackers” and the game was banned entirely.

If you look at old lacrosse prints of 1900 era Ivy Leaguers dressed for lawn tennis, playing the early American game of lacrosse, you will notice that the keeper stands between two flags on posts, but there is no top bar and no net in the goal. The man who first wrapped a tennis net around those posts was a genius. I imagine he was tired of chasing balls into the next field and carriage parking lot on shots that missed and even on shots that scored.

How many arguments about whether a ball scored or not did this guy prevent? This development is the sliced bread of lacrosse. It provided accountability and a physical reward for hitting the goal, not to mention, the ripple of the net on a sweet score. It is a “no duh” revelation we all take for granted. Many scholarly French, English and then Americans played the game before this unsung and unknown hero saved the game from its own tradition.

Most of the above would not have been possible with an established and accepted set of rules for the game. Said rules and regulations began in the 1850’s when a, a Montreal physician, W. George Beers took some initiative and likely some grief trying to coral the brutal and hard-to-play-and-follow game into an acceptable sport for a skeptical Canadian public. There’s a reason you’ve never heard of the “kick in the stomach dodge” or the “spear pick” or the “skull-cracker.”

They are illegal, now. There was a day when anything was game and people often left the field crippled. A late 1600’s observer is quoted “If a player keeps the ball between his feet and is unwilling to let it go, he must guard against the blows his adversaries continually aim at his feet; if he happens to be wounded, it is his own fault. Legs and arms are sometimes broken, and it has happened that a player has been killed. It is quite common to see someone crippled for the rest of his life who would not have had this misfortune but for his own obstinancy.

When these accidents happen the unlucky victim quickly withdraws from the game, if he is in a condition to do so, but if his injury will not permit this, his relatives carry him home, and the game goes on till it is finished, as if nothing had occurred.”