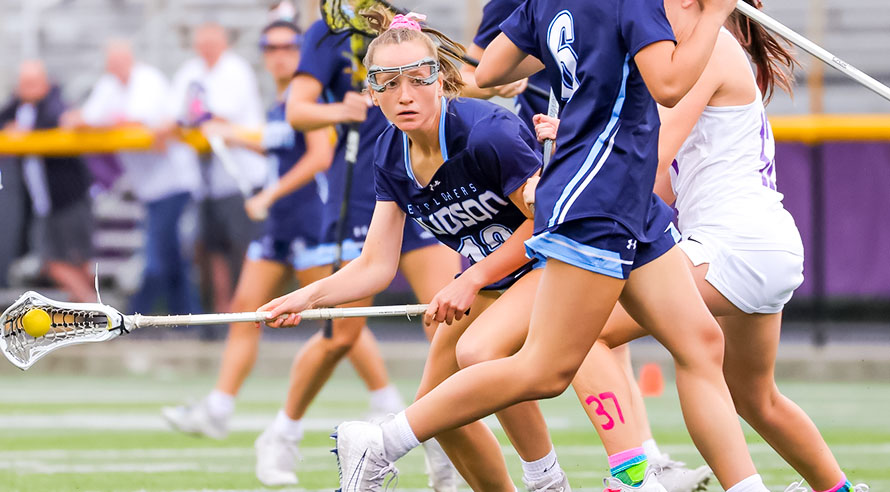 Let me begin with an apology, as these thoughts may upset the old school purist coaches. Do you consider each minute in practice time to be valuable? Do you take the time to plan your practices down to the minute or analyze the number of touches per player, per drill, regardless of the age group you are coaching? Are we truly developing better lacrosse fundamentals and skills by running laps?

Running laps before practice clearly does not meet any of the four filters above, and using running as a punishment or deterrent for poor play does not improve it. There I wrote it, and now we can discuss alternatives.

There is an age-old custom in coaching that suggests we need to start each practice with the kids running two laps around the field. It is a traditional way of starting your valuable practice time in a sluggish and boring way. The kids hate it and lose focus early, but it does offer coaches an opportunity to waste five to ten minutes of practice time discussing what they had for lunch or watched on ESPN. The concept of a warm-up, getting the blood pumping, breaking a sweat, and getting loose before stretching are all noble concepts, but maybe there are better ways.

This is not a three-man weave. This is not basketball practice. In lacrosse, we never pass the ball to a player and then run behind him. Thus, we need to be consistent with emulating a game scenario. But, in full-field transition, we often look laterally to a breaking player and pass across our bodies while on the run. Before practice, set a number of extra balls up and down the sideline. If a pass goes awry, the closest player in that group simply picks up a ball from the sideline and continues. We never want to stop a drill to chase balls.

This can also be run as a two-man drill. In this variation, we line up two sets of two players, who simply pass the ball 15 yards back and forth as they run down the field. Now we have a warm-up that begins practice with a sharp set of whistles and action, but more importantly we are also working on stick skill fundamentals at the same time. The ball stays on the outside shoulder for passing, so we have both right-hand and left-hand touches.

We run up and back four or five times, the kids are warm and ready to begin shooting drills or stretching, and at the same time they have each had over 50 touches in the first seven or eight minutes of practice. Mix it up each day or consider utilizing full-field passing drills to meet the same objectives.

Running at the End of Practice

If you are a varsity coach, you may still want to have some conditioning running, such as cross-field running or shuttle runs, at the end of your practice, and many college coaches do the same. But the most progressive coaches consider the entire practice to be a conditioning drill. They design practices in which players are constantly in motion and running is combined with fundamentals or drills.

Again, with a little creativity, you can combine the two concepts. One of my favorite ways to conclude practice is with a good 10 to 12 minutes of the Belly Drill.

This is a running, conditioning, passing, shooting, and perhaps most importantly, thinking drill. The coach starts with the ball at the midfield line. In its simplest form, we separate the team into two groups and start with three offensive players and three defensive players. We mix the poles up in both groups. The drill begins at the midfield line and goes 50 yards to the cage, where we have a goalie.

The first twist is that the six players in the drill start the drill by lying on the ground on their bellies. The coach throws or rolls out the ball, and the players need to identify where the ball is, pick up the ground ball, and now we are in a broken field 3V3 transition situation. They then attack the cage for a shot. Following the shot, they must run/jog back up to the midfield line on the outside of the field.

The coach may throw the ball 20-30 yards giving the edge to the offensive players to get possession. The entire sequence for each group is eight to ten seconds. When the first group gets off their bellies and are involved in the drill, the next group immediately goes out and lies down on the field.

So now we have almost an old “up-down” drill with six players at a time, running 50 yard sprints in transition, and then jogging 50 yards back. If you have 20-25 players at practice, they are back in the drill every three or four segments. This is a great drill for conditioning.

Variations might include four on offense and three on defense. Coaches might even have four on defense and three on offense and suggest doubling the ball immediately. But they all start with players on their bellies. These are the variations the coach calls out with each group, so now the players need to think and focus as well as play, especially when they are tired. If the defense gets the ball, they then must clear the ball to midfield.

I do not know why, but our players love this drill. Pretty soon they develop strategies on where they take the ground on their bellies. They try to mix up their spacing all over the field or box out on their bellies. As a coach, let it go. They are having fun and conditioning at the same time. After five minutes, reverse the two sets of players to have the defensive group move to offense and so on.

We often conclude the drill by doing it as a 1V1. Whoever gets the ball is on offense, and we keep score between the two groups with just two players as the others cheer on their teammates. The winners are done, and the losing team collects the balls and/or cages.

Have fun and remember to keep the Four Keys in mind when planning your practices, even your conditioning.