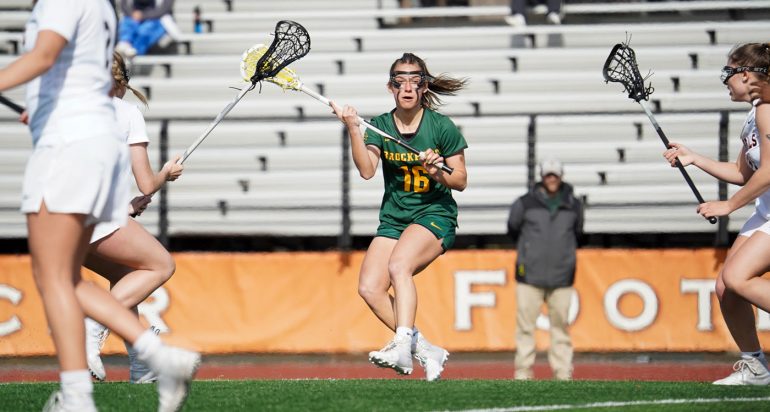 After the offensive team loses possession of the ball, attackmen must quickly switch gears to playing defense. As the goalie and his supporting cast try to move the ball across midfield, it’s the attack’s job to stop them. Any offensive player who wants to know how to play lacrosse on an advanced level needs to learn how to ride the defense.

Contents show
1 The Ride
1.1 2 Types of Rides to Recognize
2 How to Play Lacrosse on Both Sides of the Ball
2.1 10 Essential Tips for Riding Attackmen

The ride is a lacrosse strategy in which the offense attempts to prevent the defense from clearing the ball out of their zone. The objective of the ride is to cause a turnover even before the other team has the opportunity to transition into playing offense. In the best case scenario, the riding team will regain possession and have the opportunity to score a quick goal in an unsettled situation. However, once the ball crosses midfield, the ride is effectively over.

2 Types of Rides to Recognize

A settled ride may occur when:

An unsettled ride may occur when:

How to Play Lacrosse on Both Sides of the Ball

For many attackmen learning how to play lacrosse, playing defense can be unnatural. These players may focus much of their energy on improving stick skills or shooting accuracy. However, defense is a big part of the game no matter what position you play. The best lacrosse players are well-rounded athletes who can play both sides of the ball.

Like football, lacrosse is a game of time possession. The more your team has the ball, the more opportunities you have to score. As you learn how to play lacrosse on an advanced level, you can do your team a big favor by practicing these riding tips.