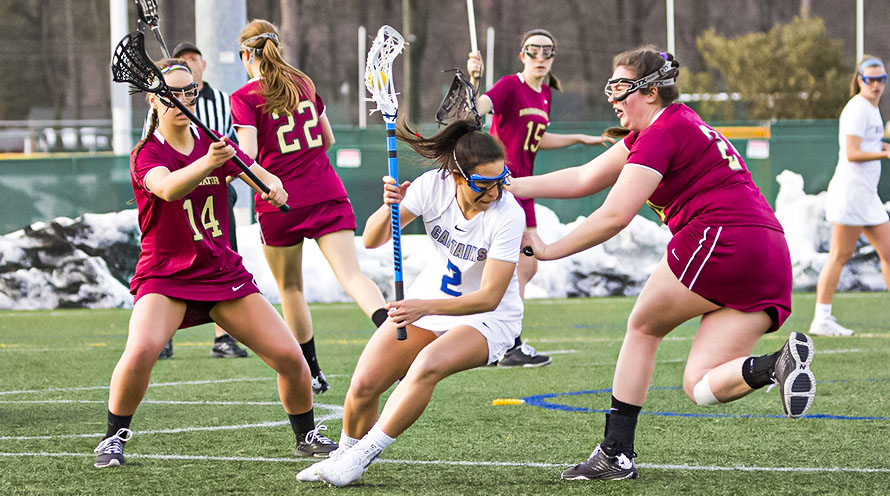 If you are a long-time traditional coach, who honestly believes that running a traditional fast break drill for 15 minutes every practice with three attack players set up in an L formation, with three poles standing there waiting to cheat on their slides with them, while a middie streaks down from midfield is really helping your team, then you may not like this article.

Coaching paradigms have changed. First, with higher quality teams you actually see this scenario but once or twice a game, if that, so I might suggest it is just not game realistic. I might also suggest that it is repetitious, monotonous, and boring. We can do better.

The major criteria for good lacrosse drills we get from top NCAA lacrosse coaches include emulating a game situation, evolving and changing the drills to keep them interesting for the players, and doing drills at an extremely fast pace.

If you are in love with the traditional format, at least consider changing up a little. The facts are that rarely in any game are our offensive and defensive players sitting and waiting for the approaching break.

Contents show
1 Option 1: Bring in the Attack and Poles from Different Areas
2 Option 2: Change up the Numbers
3 Option 3: End with a Clear

Option 1: Bring in the Attack and Poles from Different Areas

Even if you love the format of the old 4v3 fast break, consider putting your attack and defenders at the midfield line and start the break with a middie breaking from the opposite box restraining line, 65 to 70 yards from the cage he is attacking. This is so much more game realistic, emulating a break from the defensive end as both the attack and the defenders need to retreat on the run, assuming their positions on the fly. Fast breaks in games occur in truly unsettled situations, not with players waiting for the break as it approaches.

To make it different at your next practice, consider putting your poles on one side of the box or in the alley and your attack players on the other side of the offensive end so that they then need to assume their spacing and their positions on the fly, coming in from the wings. This might more accurately depict a break from a broken clear.

Option 2: Change up the Numbers

Try running this drill with two middies breaking and one or two middies trailing, thus a 5v3 to a 5v5. Be patient the first time you have players run this drill. The mere fact that we have added an offensive player or middie to the timeless drill may mess them up. No worries; they will work their way through it if you stop talking and allow them to run it this way.

Each scenario offers unique opportunities to coach different fundamentals in sliding in transition. The possibilities are endless; just use little creativity in your practice planning. The benefit of keeping things changing and teaching players to think on the run is a lot more fun and will expedite the improvement of your players in these situations.

Option 3: End with a Clear

Practicing rides and clears can be boring and frustrating. Consider ending each repetition of the drill with a clear. If the shot scores or misses the cage, the goalie immediately grabs a ball out of the cage, and off we go into a clear. If he makes a save, immediately go into a fast clearing pass and, most importantly, the players who were on offense now need to ride and ride aggressively.

And again we have options. One day we might force a quick clear with just the defensive players on the field with the goalie. This means that even by adding the goalie to the clear, we do not have a man advantage in our clearing scheme. Thus, the players might be 4v4 or even 5v5 on the clearing team. This forces players to really move both on and off ball to get open or be more aggressive carrying the ball on a clear.

At the next practice, we might add a line of defensive players in the lower corner of the box behind the cage. Following the shot, they get added to the drill to emulate clearing with the additional player advantage. But again, nothing is directly coming out of a set formation but originating in an unsettled situation. And it is not just about clearing but about aggressive riding as well.

Finally, increase the pace to keep players running (conditioning) and engaged. When the clear is moving just past the box, start the next group (65 yds away) in the break down the field, with the new attack and defenders for the next repetition coming onto the field. This may sound or look confusing at first, but it really quickens the pace. Players love it; it forces them to concentrate and offers more reps and touches in the same seven to 10 minute time allotted for the drill in your practice plan.

Lacrosse is not football; it is a very fluid game, and every scenario is a little different. It is not as tough as you might think to incorporate this aspect into all of your drills. This applies even to traditional coaches coaching traditional fast break drills.