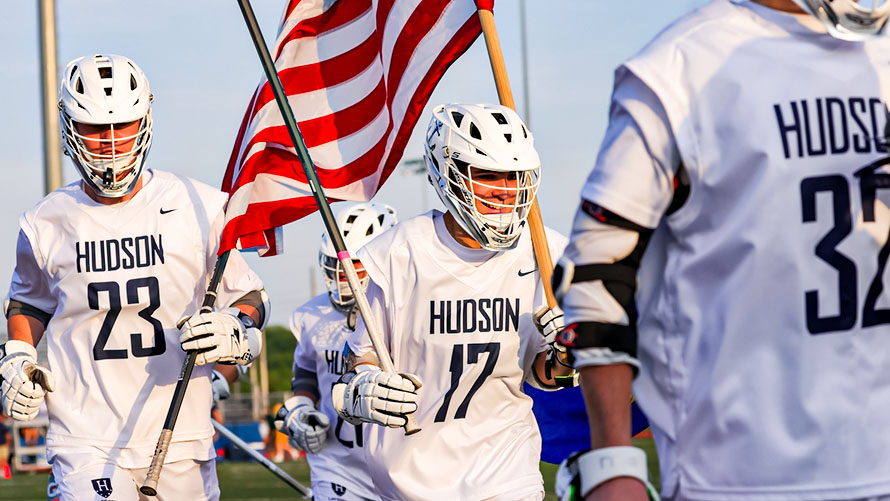 Have you ever found yourself on the sidelines getting frustrated with your players as you watch your team in a riding situation and a player on the clear simply runs past one of your players and then another one or more of your players en route to an 70-yard run and an easy clear?

As coaches, we often make assumptions about double teams or traps. It looks good from the sidelines for an instant, then off the opposing player goes with a good set of legs. So from a strategic perspective, how can we turn a weakness into strength?

This scenario happens all the time in games, and rides, clears, ground balls, and the three-man ground ball drill just do not seem to get it done. Traps and quick spontaneous double teams do not come naturally. They need to be practiced, and they need to be coached.

The ‘V’ Drill is fun to practice, the kids love it, and you will quickly see results when it becomes natural for players anywhere on the field. But learning the technique is not natural at all. It requires a little patience on the part of the players as well as teamwork, trust, and an understanding of the concept. We teach our kids to slow down and trap together.

The first player to the ‘V’ needs to take an outside position, both with his stick and more importantly his feet. The role of the first player is to:

The second player in the trap needs to arrive almost simultaneously, with his stick and feet on the opposite outside shoulder so the player now rolls into his stick check, providing an opporunity to put the ball on the ground. The part that is a little counter-intuitive for players occurs when we have a right-handed player holding the stick as he naturally does, but the ball carrier has his stick and the ball on the opposite side. Get the stick in your left hand in this case, the outside, and force the player to roll.

In essence, both players arrive at the ball carrier, each with their sticks on his outside shoulders regardless of which is their strong hand on defense. Thus, the two sticks outside form kind of ‘V’ with the ball carrier in the middle. We coach this technique on the premise of trust with teammates. If defender one takes the outside position and trusts defender two to be there, it works. If defender one trusts his teammate (defender two) to be there, and he arrives late or is not there at all, it looks pretty silly for defender one. Our kids love this high risk–high reward technique, and it builds trust in a team.

Set a rectangular box with cones 15 yards wide and 25 yards long. On one side in the middle, we have a line of ball carriers. On the other side, we have two defenders, each in a corner of the box. On the whistle, the ball carrier needs to go from one side of the box to the other while staying in the box.

The two defenders, in tandem, need to attack the ball carrier, with each defender with outside position, and force the attacking ball carrier to roll into their teammate. This is not a place for a body check. Just put the ball on the ground, checking with a raking downward motion, and we now have a 2v1 ground ball scenario and are off in transition.

We start the players in the corners initially so they can more easily read their teammates and the outside positions they need to take. Like all of our drills, the whistles blow quickly. Each set is only four or five seconds, and all players rotate all lines.

Once the players begin to understand their roles and are working together, it is time to go to the next step. Now position the two defenders in a ‘stack’ on the far line, forcing the second defender to read which shoulder his teammate chooses to force the roll and go to the other side.

Now move the rectangle from the crease to the sideline, from goal line extended (GLE) to the midfield. Start with the offensive player on GLE and the two defenders stacked at midfield and blow the whistle. The offensive player still needs to stay in the now much larger box, and the two defenders have to work together over a 50-yard space to trap together.

Now we have coached in progression a specific technique for traps and double teams and in our drills emulated true-to-life game scenarios. We need to be patient; it something that needs to be reinforced three or four times a week in practice, but it can be done quickly and in different stations on the field. Kids do not learn to trap or double through telepathy; it takes good drills and coaching and trust.