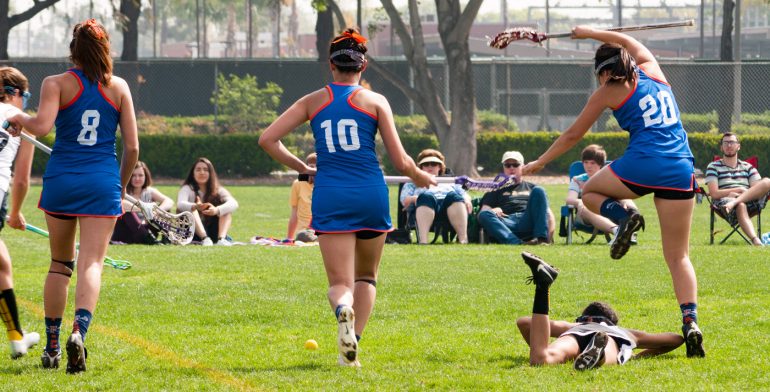 Lacrosse is North America’s oldest indigenous sport, dating back to the early 15” century. While there is some debate as to exactly where and when the sport was developed, most people agree that the precursor to modern day lacrosse was invented by the Huron and Iroquois tribes living around the St. Lawrence River, in what is now New York and Ontario. Baggataway, as it was called by the Native Americans, was a highly spiritual and culturally embedded activity, used as a means for conflict resolution, healing the sick, and giving thanks to the Creator.

Matches between tribes were often very large and could consist of hundreds, or even thousands of players. The fields used natural boundaries, the goal lines could be several miles apart, and a contest could last for up to three days. In the early days of the sport, baggataway was also used to train young Indian warriors in the art of battle. Since many players were unable to get close to the ball, they focused their efforts on using their stick as a weapon. The Cherokees referred to the sport as “the little brother of war” since injuries and even deaths were common.

The baggataway ball was made of hair-stuffed deerskin or knotted leather strips, and although the tribes at first used a stick with a curved end to simply strike the ball, they later invented a strung head to carry and pass the ball as well. The sticks used by the northeastern tribes were one-piece wooden carvings, typically exceeding three feet in length. The top of the shaft ended in a sort of crook and a large, flat triangular surface of leather and catgut netting extended as much as two-thirds the length of the stick. Where the outermost string met the shaft, it formed the pocket of the stick. The first Europeans to witness baggataway were French explorers who felt the stick resembled a bishop’s crosier – “la crosse,” in French.

In the early 1800s, Europeans in Canada began playing the game. Montreal’s Olympic Club organized a team in 1844, specifically to play a match against an indigenous team. Similar games were played in 1848 and 1851. The first step lacrosse took towards becoming a legitimate, modern sport came when the Montreal Lacrosse Club (formed in 1856) developed the first written rules. In 1867, a Canadian dentist, W. George Beers, standardized the game with the adoption of set field dimensions, limits to the number of players per team, and other basic rules. Beers, known as “The Father of Lacrosse,” also replaced the deerskin ball with a hard rubber ball and designed a stick better equipped for catching and accurately passing the ball.

In the early days of the sport, baggataway was also used to train young Indian warriors in the art of battle.

By the middle of the nineteenth century, lacrosse had pretty much died out in the northern United States, but was revived by the Onondaga tribe in the 1860s, influenced by the St. Regis tribe, which was still active in Canada. White players in upstate New York began playing lacrosse around 1868, and the sport soon spread to the New York City area, where several teams were soon organized. The first intercollegiate game in the United States was in November 1877, pitting New York University against Manhattan College. Philips Andover Academy (Massachusetts), Philips Exeter Academy (New Hampshire), and the Lawrenceville School (New Jersey) were the nation’s first high school teams in 1882.