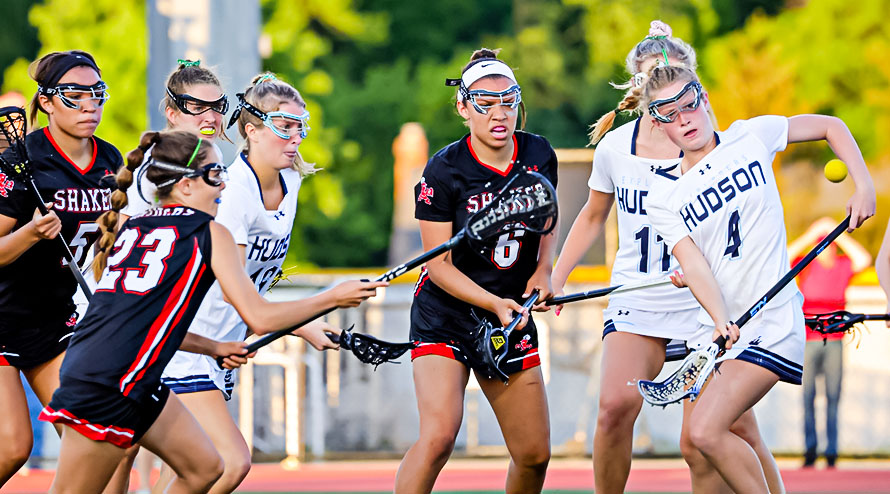 This drill is a full-field scramble, constantly creating different looks and variations in transition, sliding, recognition, and fast movement. Players get to play in a number of very fluid matchups, from one-man advantages in transition to even scenarios with different numbers on each run down the field. The huge positive impact in conditioning during a fun exercise is a bonus.

With players age 8 through 13, you might consider bringing the cages to the restraining lines, but in its purest form it is a full-field drill. We begin with three attackers and three defenders at each end. All other players – and we include our shorties, attackers, and middies as well as the rest of our poles/defensemen – are lined up on both sides of the field at the midfield stripe.

Start the drill with a face-off but with no wing players. Face-off play is so critical, but we seem to run out of time in practice or do not have enough coaches. This is a neat way to get more face-offs integrated into a drill.

The player capturing the face-off breaks down to the offensive end, with the other face-off player running to catch up. In essence it is now a brief 4v3 to a quick 4v4 on that end when the other middie recovers. We then very quickly play to a shot or a take-away, actually just 10 seconds or less. If it is a shot, the goalie immediately makes a long outlet pass to a single player who has stepped on the field from one side of the midfield line. And this now makes a total of three middies in the drill.

The player just entering the drill then quickly breaks to the opposite end in a fast break. The two original middies from the first face-off also must sprint all the way down the field. So in essence we are in a 4v3 break, with two players joining the action to make it 5v4.

We play quickly to a shot or take-away, and the goalie at that end makes a quick long outlet pass to a player who has stepped up on to the field from the far sideline at the midfield. He streaks down to the offensive end, while the other middies leave the defensive and run the length of the field and get in the drill. So again a brief 4v3 fast break evolves into a 5v5 scenario.

At this point we are actually playing 10v10. I usually like to play it out in that format for a two-minute period, keeping score to make it competitive and interesting.

Then we might switch the attack and defense or rotate in players. But very quickly we bring out two different face-off men, get the lines off to the side at the midfield back in order … and we go again.