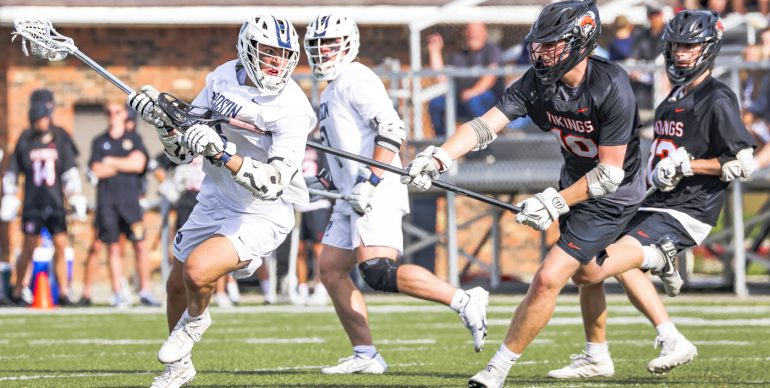 As parents and kids learn the game of lacrosse together, there can be some confusion along the way. After you both figure out how to put on elbow pads correctly, learn to master four commonly misunderstood youth lacrosse rules that are a part of every game.

For example, a check to the helmet is considered slashing. However, a stick check to an opponent’s gloved hand, when they are holding the ball, is legal.

The contact must be a “strike” or a “blow” to be considered a slash. Otherwise, it is referred to as a “brush,” which is not a penalty.

Penalties for excessive hits to the head and neck, as well as penalties for hits to defenseless players and blindside hits, are points of emphasis in youth lacrosse rules this year.

Off-sides is a common youth lacrosse penalty, which results in a loss of possession.

A team is considered off-side when it has:

Midfielders are not the only players who can cross the center line. For example, if a middie remains on the defensive side, then a defender can cross on to the offensive side. The same rule applies for attackmen.

A team is not off-side when:

Lacrosse is a physical sport but there are protections in place for player contact. While not commonly understood, youth lacrosse rules for holding are another way the game protects its players.

Youth lacrosse players may not:

However, holding is permitted under these conditions:

Warding is commonly misunderstood to newbies, because it is specific to the game of lacrosse.

The official definition is: “A player in possession of the ball shall not use his free hand or arm or any other part of his body to hold, push or control the direction of the movement of the crosse or body of the player applying the check.”

For example, an offensive player who is holding their stick in one hand may not push the defender away with their other arm.

Whether you are on the field or in the stands, understanding these four important rules will help you better follow and enjoy the fastest game on two feet!