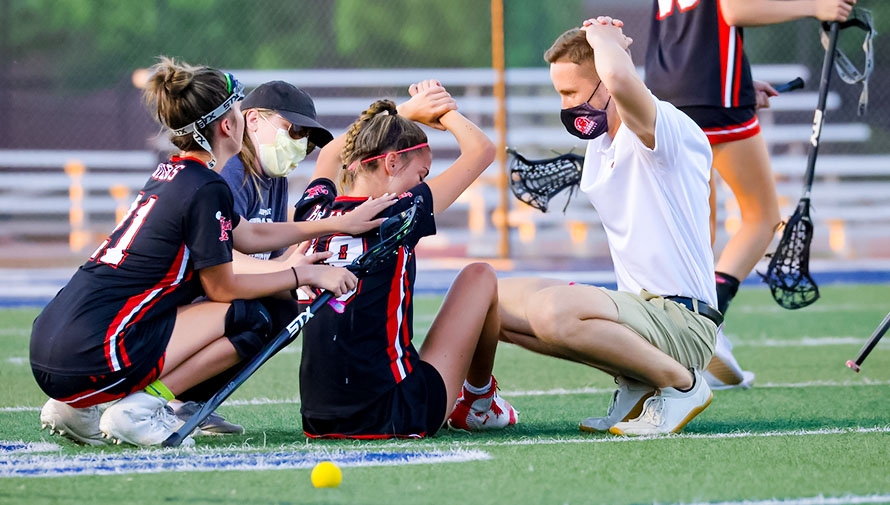 Coaches are always looking for drills that encourage conditioning, are fast-paced, and emulate game situations. In addition, this drill is a great alternative when practice is beginning to drag or the kids seem to be going through the motions and a little energy is needed. It is also a drill that can be used to pick up players’ spirits after a tough loss, dragging practice, or difficult stretch of games.

Our players love this drill; it is wide open and fast. Many coaches run the drill with cages from sideline to sideline, but I like it as close to full field as possible. Move the cages about 80 yards apart. I like poles, as well as attack players, in this drill in all positions. It is about speed, ball movement, and touches, and you never know when an attack player is closer to the midfield line and might need to play some transition defense over the line in an unsettled game situation.

Start with a goalie in each cage and three lines of players just behind the goal line extended (see diagram). The drill starts with a quick outlet pass by the goalie to three offensive players streaking down the field. On the other end, there are two defensive players waiting for them. We play 3v2 live, working on spacing and slides and communication. The first time down, just assign two players to play defense.

The three that were on offense stay and now play defense. The last player who touched the ball on offense, presumably the shooter, goes immediately to the waiting lines, and his two teammates remain as the two defensive players and so on.

Coaches should be on the field with balls. If we miss an early pass or the outlet pass goes out of bounds, just roll or pass a ball to an offensive player to keep the speed and fast paced continuity of the drill going.

As a change of pace, you can also run this drill 4v3 in basically the same format. The first time you change the format, it will usually mess up your players to a degree. Just smile and be patient. It is different than a typical fast break drill, as no player is stationary, but perhaps more game situation–realistic. Focus on offensive spacing, quick ball movement and, again, outside shoulder passes.

Defensively, in 4v3 we are now concentrating on a triangle type rotation. One player to the ball, while two stay in the hole until the first pass, and then we want to rotate quickly opposite in direction from the pass or into the direction of the first pass.

As all the NCAA coaches we work with on the web site suggest, run this drill for 8-10 minutes then move on. The days of staying with a drill until they get it right or score three in a row are gone. If they just are not getting it today, move on to the next drill on your schedule and come back to this one in a few days.