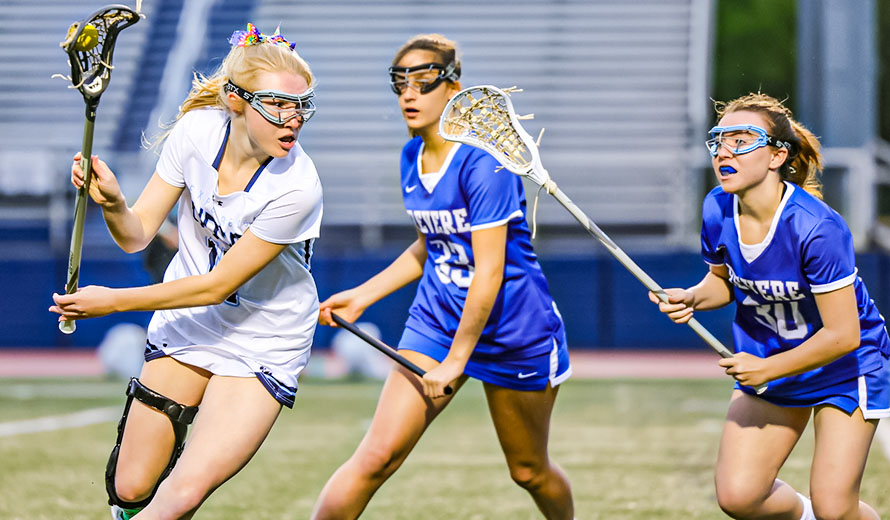 Best Single Drill and 6 Tips to Make It Better

The beautiful thing about 4V4 drills for players of all ages is that they open up the field and allow players to have more room to maneuver as well as less congestion, which lets players see the offensive end of the field more easily. The 4V4 drills also allow for players to drive, double team, set picks on and off ball, and generally are more fun for than 6V6.

In our discussions with NCAA coaches, when they do spend time practicing players in an even (versus a transition) drill or man-up situation, they spend more time in 10V10 full field and in 4V4 situations than they do in 6V6. Yet many many coaches spend countless relatively boring hours practicing six against six in practice.

Most of us simply do not have enough players at practice to allow a lot of time in 10 against 10 full-field (with any substitutions), or the ball stays in one end while players at the other end become bored or distracted. Younger players may even start throwing dirt at each other. We have all been there!

The fact is that when you play against top skilled teams – in this case many, many D-I prospects – the opportunities to be in snapshots of transition are greatly reduced. And I learned that even though we are a skilled team, we are not nearly as dynamic in a settled situation, and in a game that is played in settled 6V6 situations, we are good but not great. Coach Seaman was absolutely correct. As a coach, I thought I was progressive and cutting edge with drills, but I had not prepared our kids for success in settled situations. I had lost sight of the forest for the trees. So, how do we as coaches get the kids prepared for these types of tough match-ups and still keep practice fun, always moving and interesting? Try these options.

Contents show
1 Tip 1: Start 4V4 from Set Formations
2 Tip 2: Begin the Drill Unsettled
3 Tip 3: Lock on High Pressure – Before the Pass
4 Tip 4: Pressure the Ball and Lock on Adjacent – After the Pass
5 Tip 5: After the First Pass, Immediate Double Team
6 Tip 6: Keep It in the Box

I used to run my 4V4 from the four corners of the box, thus violating my first rule for all drills: they must emulate game scenarios. I learned from coaches to begin the drill with the four offensive players placed as they would be in one of our offensive sets. Have the four players take four of the positions out of your favorite six man set. So we recommend starting the 4V4 with four players placed in one of your sets. Begin the drill with four players in a 1-4-1 set, a 2-2-2 set, or 2-3-1 etc. And the coach begins the drill with a pass to one of the offensive players. This brings the drill back to reality, emulating a game situation. In our practices, we run each group through two different sets and run two 30-second sessions/runs with each group of offensive and defensive players.

As another variation, begin the drill with four offensive players on one side of the box, with four defenders on the other side of the box. Begin the drill by rolling out a ground ball away from any players, up top, or possibly behind the cage. This emulates a broken clear and puts the players in a scramble drill. Again, we usually let each group run the drill twice and then roll out a ground ball or have the goalie pull out the ball and immediately go into a clearing situation after the second set.

Tip 3: Lock on High Pressure – Before the Pass

In this scenario, the players might line up in a formation, but the defense has the task of ‘locking on’ with high pressure, attempting to deny the first pass from the coach. After this weekend, I really wished I had prepared our kids for the aggressive ‘deny the ball’ pressure defenses we saw during the tournament. Our kids were not prepared to ‘V’ in and out or pick off ball to make sure they were open against a stifling pressure defense. This drill will make them more comfortable and learn the importance of the fundamentals of getting open against pressure.

Tip 4: Pressure the Ball and Lock on Adjacent – After the Pass

This variation of the drill is very similar to the tip described above, but rather than go with heavy pressure before the pass that simulates an inbound pass, it takes place after. Or it may take place when a specific player catches a pass even if it was not the first pass. There are times during a game when you or your coaches might identify a player, one who is not as strong with stick skills as his teammates, and we want him to have the ball. When the ball gets to the identified player, we pressure the ball aggressively and then ‘lock off’ the adjacent players so he has nowhere to make an easy pass.

This is fun to practice and forces the defensive players to not only communicate but also to really think and plan for the pressure.

The other key teaching point of this drill is that we now are in a mini-transition situation, and we need to move the ball to the open side of the field. Do you remember, “pass, pass, and then shoot”?

Although all successful coaches have learned the hard way that being successful keeping the ball in the box and retaining possession the last minute of a game is not something kids learn by a chalk talk, but by practice and recognition, it is a fun variation in this drill as well. So you might just let it go as it naturally progresses or take the opportunity to coach your preferences if we want to double with a pole or with a goalie.

Shortening the playing area just makes the drill a little different and interesting for the kids. If the ball goes out of the box, or we throw it away (as in any of the variations above), the offensive players must do a 15-yard bear crawl when they come off the field.

Although I remain steadfast in practicing in unsettled transition scenarios, I have learned the critical importance of also preparing the kids to play even and under pressure. And I think we have met the criteria for our drills: fast paced, emulating game situations, and fun!