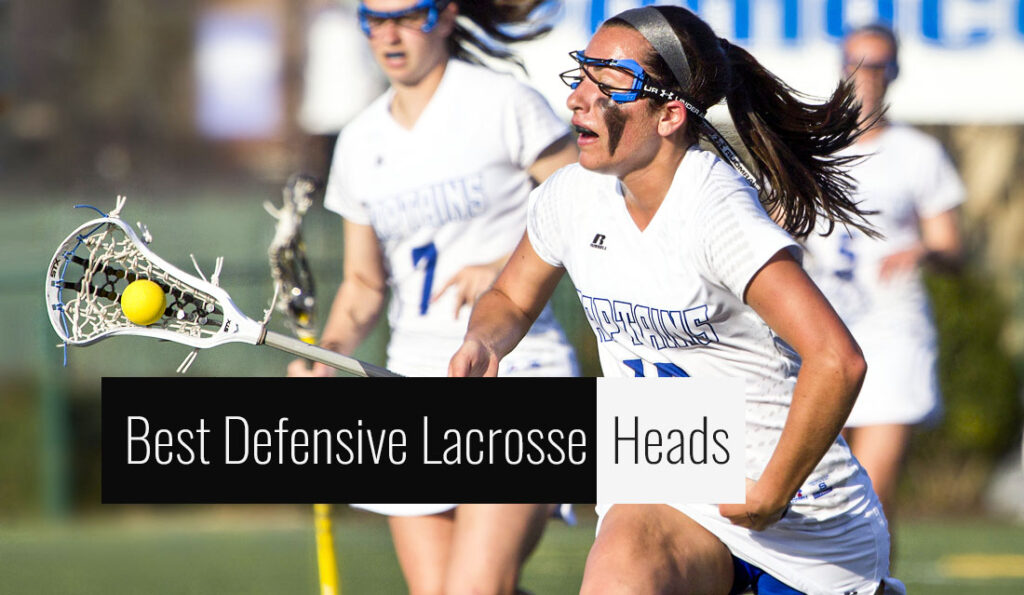 Contrary to what most people believe god quality defensive lacrosse head can make real difference in the game. So, if you are dead serious about stopping the opponent players from scoring goals, you need to upgrade your lacrosse head. Without having access to a high quality and state-of-the-art lacrosse defensive had, all your efforts to stop the opponent team from scoring goals will be wasted. So, time is now to check out the best 8 defensive lacrosse heads that you can purchase right now. We have listed them here – so, check them out –

Getting hold of the ball from the opponent players, picking up the groundballs, thwarting the shots of the attacking players of the opponent team and keeping possession of the ball as long as possible is some of the main objectives of a good quality lacrosse head.

Affiliate Disclaimer: This site is reader-supported and we earn commissions (at no additional cost to you) if you purchase products from retailers after clicking on a link from our site.

Though Maverik Lacrosse Tank Universal Unstrung Head has still got room for improvements, it is the best option out there for all defensive lacrosse players.

Be it consistency or power, String King Mark 2D Unstrung Defense Lacrosse Head has got it all. Even in case of hard throws, this defensive lacrosse head is engineered specifically to limit the flex as far as possible.

Aggressively designed, East Coast Dyes – Rebel Defense Strung Lacrosse Head is meant for those defenders who dare to throw lightning-fast shots. When equipped with this lethal defensive lacrosse head, attackers of the opponent team will start giving you the respect that you have always deserved.

Made in the USA, East Coast Dyes – Rebel Defense Strung Lacrosse Head is extremely well built and it does not have a single weak point in the design or in the structure. It has got mid pocket and an adjustable bottom string to control the depth of the head.

Warrior Regulator Max Unstrung Lacrosse head is one of those few lacrosse heads that offer superior performance without making you pay a premium price for it.  Warrior Regulator Max has identified the key areas that get the maximum number of hits and then it has reinforced those areas with extra materials so that it can withstand vicious hits from the opponent teams. Pocket tension has seen a dramatic improvement thanks to the inclusion of tilt-tech String and this will definitely have some positive impacts on the ball release.

STX Lacrosse Stallion U 550 Unstrung Lacrosse Head makes groundball pickup as easy as pie. The rear sidewall flexes perfectly on a check and thus allowing you to improve your performance on the ground. STX Lacrosse Stallion U 550 Unstrung Lacrosse Head draws its strength from the C-Channel technology. To keep the head remains stable while shooting the ball, Dual sidewall braces are included in the design. You will also need extra power while shooting the lacrosse ball and which is why the design of the bottom rail is tweaked a little to make room for high pocket placement.

The best thing about STX Lacrosse Stallion U 550 Unstrung Lacrosse Head is that this defensive lacrosse head meets both NFHS and NCAA rules. STX has added more firepower in this lacrosse defensive head without increasing its weight. To improve ball retention, STX Forward Cant design is included in the design.

STX Lacrosse Hammer 500 EnduraForm Unstrung Head is another popular lacrosse head for defensive players. STX Lacrosse Hammer 500 EnduraForm Unstrung Head allows quick groundball pickup and this is done by removing drag. Strong and durable, this defensive lacrosse head is going to last really long. Stress and impacts get distributed evenly on the sidewalls and thereby protecting the head. EnduraForm technology has also been used in the making of this defensive lacrosse head and this is what helps the head retain its toughness in warmer conditions.

A lot of engineering works have gone into the making of STX Lacrosse Hammer 500 EnduraForm Unstrung Head and the result is impressive, to say the least. The sidewalls have got strike plate included and this will definitely help you a lot while throwing checks. With this legendary lacrosse head, you can always expect smoother ball control and amazing catching ability.

STX Fortress 300 Women’s Lacrosse Head comes equipped with an STX 7075 alloy handle. Okay, I accept that this is not a lacrosse head but come on how can you ignore this amazing defense head just because someone decided to put a stick into it. STX Fortress 300 Women’s Lacrosse Head is designed for the defensive players so sorry attackers, you can’t have it. To make it easier for the defensive players to hug the ball, the center runners can be flexed out. It has got a runaway pocket which is hard to come by these days. The frame is incredibly strong and that means, it might handle a lot of abuse quite safely.

Just because it is marketed as a defensive lacrosse head, it does not mean you can’t use this head to attack. Nope, it can easily be used as an attacking head. String King Men’s Mark 2D Defense Head is best suited for harder checks and faster hands. StringKing has first identified the high impact areas of the head and then it has used more materials in those areas to make them withstand the most brutal checks but at the same time, StringKing has removed excess materials from low impacts areas and thus making this defensive lacrosse head ultralight.

The shaft and the head of lacrosse are connected by screws. So, you need to double-check that these screws are made from stainless steel otherwise they will develop rust. Stainless steel is corrosion resistant by default. Company-fitted heads usually use the right kind of screws and they also employ the right number of turnings on the screws and which is why it always makes sense to put your trust on Pre-drilled heads.

To reduce vibration and to better absorb shocks, enough boding should be provided between the shaft and the head.

Ideally, a narrow-down strut is best for defensive heads as it allows better ball control and easier scooping.  Be it deflecting balls or taking possession of balls from the opponent team, the strut will help you a lot in this regard.

As a defensive player, you might always want the placement of the pocket to be high or mid as this would allow you to have better control over the ball while on the move. You will be able to make fierce shots and will be able to hold on to the ball for a longer period of time. This is the reason why you need to make sure that the defensive lacrosse head that you are planning to purchase allow you to customize the way you want it to be. Multiple stringing options is definitely a good starting point. Also check, whether you can dye the head.

Collision is quite common in this physically intensive game and that means, the defensive head needs to be made from strong materials otherwise it will get smashed easily. Durability and stiffness are quintessential to a good defensive lacrosse head.

Collision with the lacrosse heads of other players is a part of the game. As obvious, the head has to be made from premium quality materials to cushion such impacts. The lacrosse head also needs to absorb the stress resulting from the impact of the ball. The tensile strength of the metal also needs to be double-checked.

Do you really want to deal with a lacrosse head that wobble all the time? Believe me, it can make you look stupid and all your efforts to check the opponent team’s attacking players at bay will go wasted because of this stupid head. To fix this issue, some manufacturers have used Loc-Throat technology.