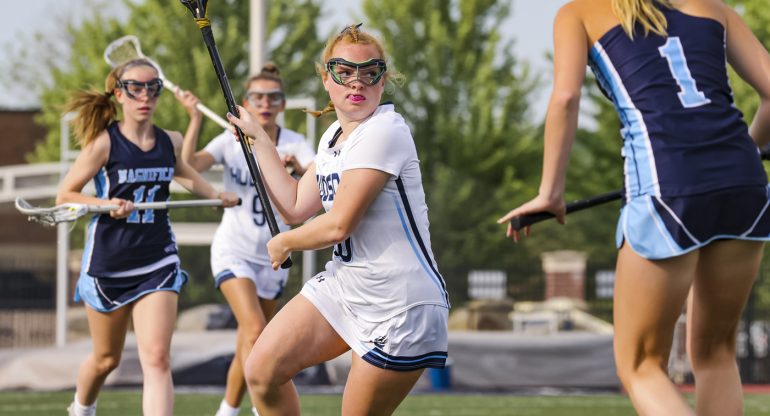 Attackmen, lacrosse’s offensive specialists, receive most of the glory as they pile up assists and goals. But to earn this coveted spot on the field, it requires practicing lacrosse attack drills that develop the crucial skills of dodging, shooting and passing. Attackmen who pose this triple threat rarely hurt for playing time.

In any given game, the team with more groundballs is more likely have the most points on the scoreboard. As a result, players who practice the art of scooping properly do their team a big favor.

Since many players typically vie for the same groundball during games, it’s recommended to gain possession by scooping on the run rather than while standing still.

In lacrosse, gaining possession of the ball is only half the battle. Players must fight to retain it as well. Stick protection skills are essential for holding onto the ball even when long-stick defenders lay check after check.

Once they have the ball, attackmen are often seen bobbing and weaving as they dodge past defenders. From the roll dodge to the bull dodge, attackmen have a number of options for getting to the cage. Attackmen who learn to be effective dodgers are likely to see more playing time and more scoring opportunities.

With a series of cones, attackmen can practice their form and technique. Then, if they buddy-up, lacrosse players can practice important aspects of dodging like change of direction and ball protection.

Attackmen, who tend to be the assist leaders on a lacrosse team, benefit from having great passing skills. They must have the accuracy to feed the ball through defenders sticks to their teammates.

Top attackmen are the type of players who are rarely seen without a stick in their hands. They frequently throw the ball against the wall or anywhere they can.

Every player, especially attackmen, loves shooting practice. All that’s really need is a stick, a ball and a cage, but there are other ways to make it more fun.

From groundballs to shooting, practicing all five of our lacrosse attack drills contributes to the creation a more complete offensive player.