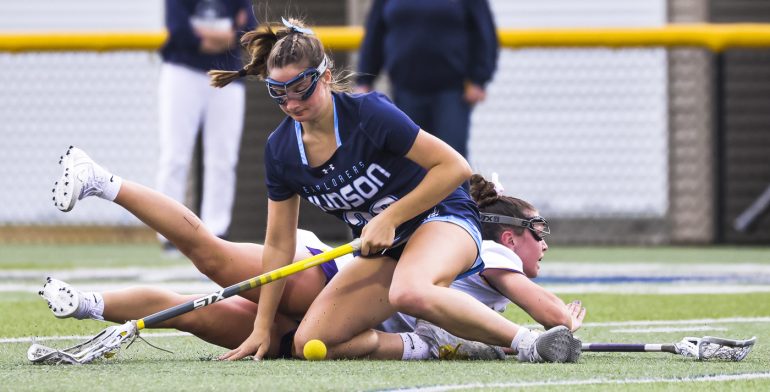 A lacrosse training regimen is easiest to digest if broken up into three parts: conditioning, strength and flexibility and agility. Each type of workout develops different skills that are important to different aspects of the game of lacrosse. For example, wind sprints are important to enhance an attackman’s speed; while weight training develops a defenseman’s powerful push.

No matter how short or simple, every workout should begin with a good stretch. Stretching helps minimize sprains, strains, spasms and muscle tears. The flexibility that comes with stretching provides players with a better range of motion.

Since running is a reality of lacrosse, it’s important for all players to jog. We recommend a daily jog as part of off-season lacrosse training.

Players can also strengthen their stamina through the practice of wind sprints. By sprinting for 30 seconds and then jogging for a minute, anyone can quickly build endurance.

Stair climbing is an excellent exercise for weight loss, strength and/or cardiovascular fitness. Stair climbing is particularly important for lacrosse players who rely on the power of their legs to move them up and down the field. Because this effective exercise doesn’t involve joining a costly gym, it is recommended for all players.

All athletes should get in the habit of performing regular, push-ups. We suggest young players practice doing at least five sets of push-ups a week. You can start with 20 per set and then move up from there.

A good upper body exercise for players of any skill level is a pull-up. Since lacrosse players require upper body strength, players who frequently practice pull-ups this off-season can gain an advantage over their competition next year.

Lacrosse is a game of speed, but it is also a game of strength. From free weights to dumb bells, weight training can be an excellent way to increase strength in the off-season. It suggested that players stick to a schedule where they practice lifting three to four times per week. Just remember, don’t lift to impress because overexertion can be dangerous.

Just because lacrosse practice is out of session, doesn’t mean players can ignore calisthenics. Players can keep their body in mid-season form by practicing drills like high knees, butt kicks, shuffles, striders or duck walks.

Agility is a supreme advantage in the fastest game on two feet. Players at every position can benefit from the increased agility that comes with jumping rope. Because the quickest feet get the next ground ball, jumping rope should become a routine part of your in-season and off-season lacrosse training.

By practicing the cone drill this off-season, players can greatly improve their speed and agility. In this drill, which can be completed alone or in a group, players weave full-speed in and out of a series of cones.

Remember, first-string positions aren’t always won in tryouts. From daily push-ups to jumping rope, players who regularly train in the off-season can gain the strength and quickness necessary to succeed at the next level.